The Guy I Dated Was Sent By The Devil 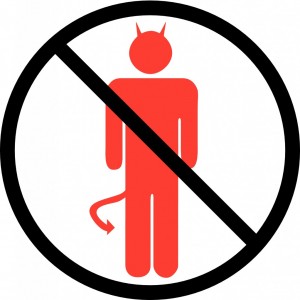 I’m not particularly religious.  I do believe in God, and I pray often, but I don’t go to a particular church, or follow a specific religion.  Therefore I believe that the devil also exists, and as a result I believe that Satan sent the last guy I dated into my life. Here’s why…

He was good looking.

He was taller than me.

He was of the same culture as me.

He had a nice, masculine body.

He made me laugh.

He was hard-working and ambitious.

He was very sociable and enjoyed socialising.

He enjoyed a tipple.

He made an effort with me, and with my friends and family he met.

He was independent and responsible.

I don’t see why God would have sent this guy, with all these qualities that I would want if I was told to write a list, and then just snatch the possibility of everlasting happiness away.  So it only makes sense that the devil saw that I was content with going about my business in life, and while God was focusing on the craziness that’s going on in the world, Satan saw a gap in the market and sent this guy to tease me, then yanked him away. But it’s okay. I know now.

Have you ever been convinced that an ex was sent to you just to mess up your feng shui?